Turtuk is a small village along the banks of Shyok river and it is considered to be the last village of northern India. With the Karakoram range on one side and the great Himalayas on the other, this small village has so much to offer for the tourists. Even now, not many people venture into this place as it is another 90 kms from Diskit. Because the roads are not very good, it can take you more than 3 hours to reach Turtuk from Diskit.

We started from Leh on bike at around 10:30 am and that was way too late which resulted us reaching Turtuk at around 10:30 pm. Hence, it is highly recommended that either you make a halt at around Diskit, Hunder or at the resorts at Nubra valley or start quite early (around 8 or 8:30 am). The roads from Hunder to Turtuk is a little dangerous and beautiful at the same time. On one side of the road flows the Skyok river which literally means The river of death. And on the other side, you will see tall mountains, many of which tends to slide every now and then blocking the roads. And if you are lucky, you will have to cross a couple of stream before reaching Turtuk. As we got really late, we had to cross one stream at around 9:30 at night which is very risky and the water there is so cold that within a few seconds, you will stop feeling you legs.

Me and my friend had to get down to push our bikes through the stream, and it was one hell of an experience. 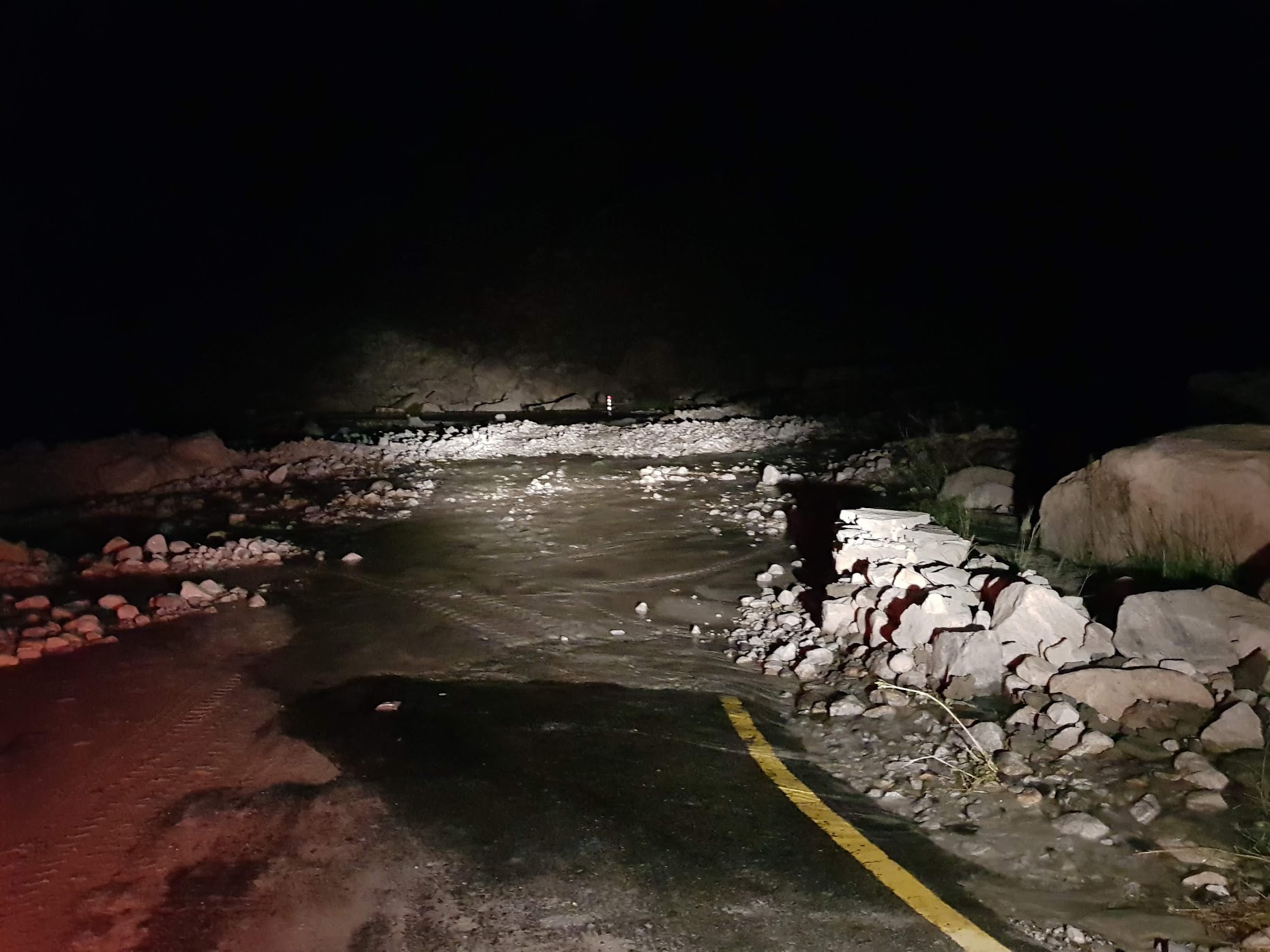 The village of Turtuk is divided into three parts. One is the lower part of Turtuk, where you will find a few hotels to stay and a few shops as well. However, the upper part of Turtuk is quite different. People there don’t want roads and hence you can’t take any vehicle there and walking is the only mode of transport. Even for constructing buildings, things are carried by men or using donkeys to pull heavy loads. I guess, that’s why the place is still so beautiful and devoid of pollution.

Turtuk’s history is very interesting as it was ruled by many different rulers because of its strategic location. From here, the Chinese silk route is about 5 days. Pakistan is very near and so is Kargil. And that’s the reason you can feel the influence of Persians, Mughals etc.

Almost the entire population in Turtuk is Muslim dominant, but there is not even a single butcher shop and people hardly eats non-veg here. Also, there is a mosque here where you can find symbols of Hindus, Muslims, Buddhist and even Christan symbols.

Until the 1971 Indo-Pak war, Turtuk was part of Pakistan. Our guide said “We slept in Pakistan and woke up in India”. Yes, that's how suddenly the identity of about 2500 odd people changed overnight. There are many families in Turtuk where someone’s husband, wife, father or some family members have been left in Pakistan and now they can’t come back. Hearing all this, I felt so sad and the only thing which came to my mind was: "What have they done to deserve such a fate".

The land of Turtuk is very fertile and people here grow almost all kinds of vegetables and all of that is organic. We tasted a few vegetables right from the farm and we were amazed by the taste of them. Yes, this is for sure one reason why everyone in Turtuk is so fit & healthy. The Shyok river also plays a very important role in the agriculture of this region. The Shyok river which is a tributary of the Indus river originating from the Rimo glacier which is part of the Siachen glacier provides not only water supply but also makes the land very fertile.

The locals here are very shy but they do welcome all visitors with so much love. Being a small village, everyone knows each other and will greet them asking how they are. Although people here mainly speaks Balti language, they also understand Hindi and English. 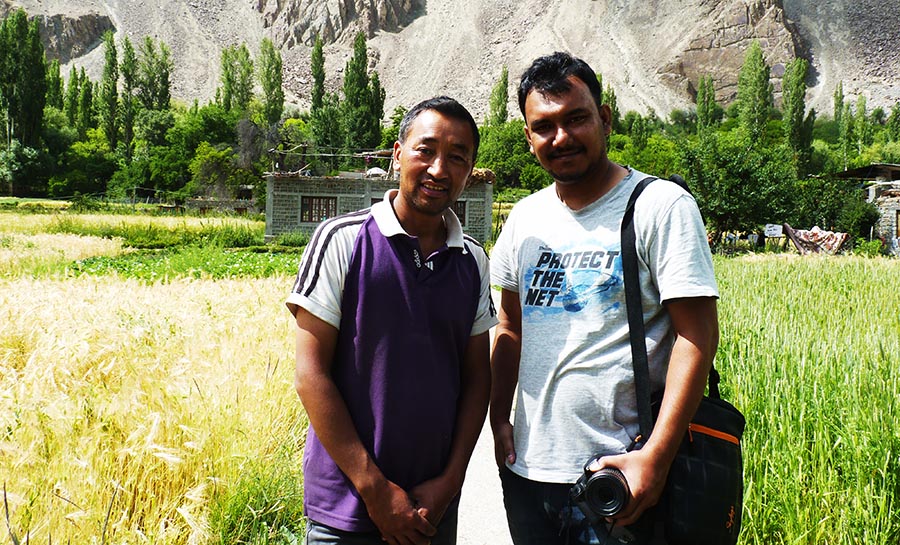 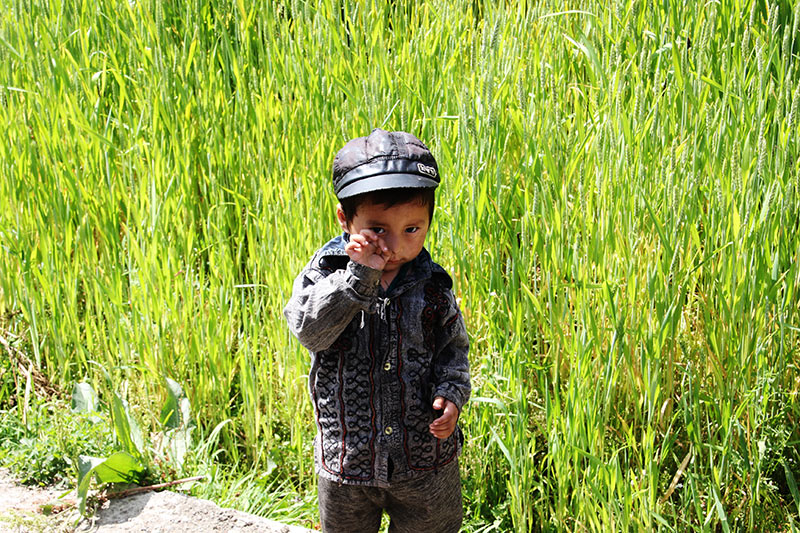 People here are very helpful to the Indian army as well. Initially, all the supplies for the army use to come from Delhi and far away places. This resulted in a lot of loss. However, now a lot of the food supply for the army is being provided by the locals here in Turtuk. Even during the Kargil war, the locals here along with their king Kacho Mohammad Khan the descendent of the Yabgo dynasty helped the Indian army a lot. That's the reason why, the first thing which any of the young man from Turtuk tries to do is to get into the Indian army.

Things to see in and around Turtuk

The beautiful village: Even though Turtuk is a small village, there are quite a few things to look at. First is the surrounding beauty of this place with the Shyok river running between the two mountain ranges. 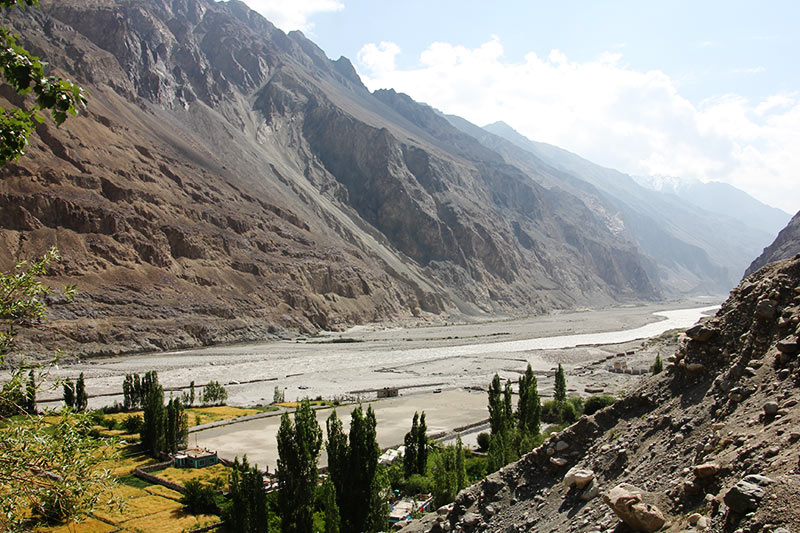 And you can also zoom in a bit to see the bunkers of Indian military on top of the mountains. 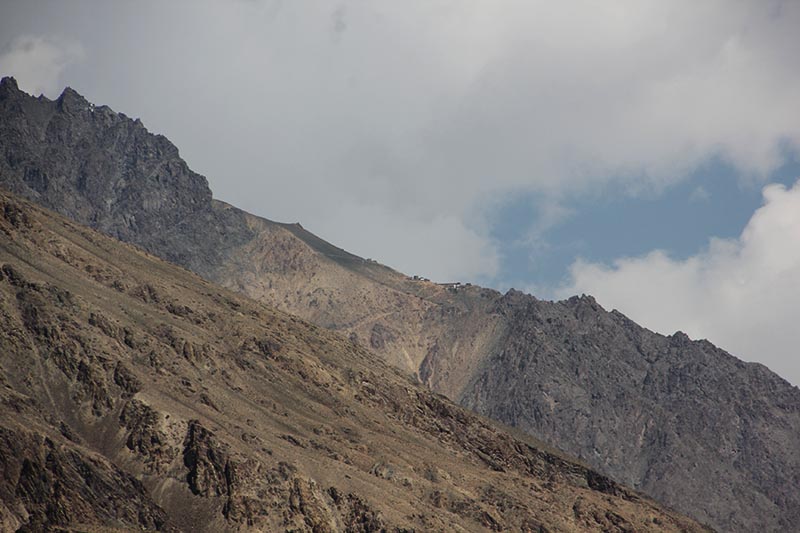 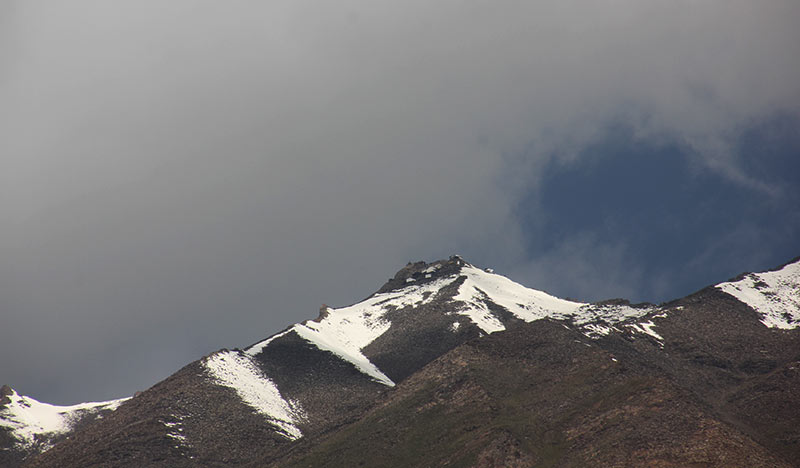 The greenery: Also, you will see a lot of cultivable land with crops, flowers and fruits. The land of Turtuk is very fertile and the people can grow almost all kinds of vegetables here. 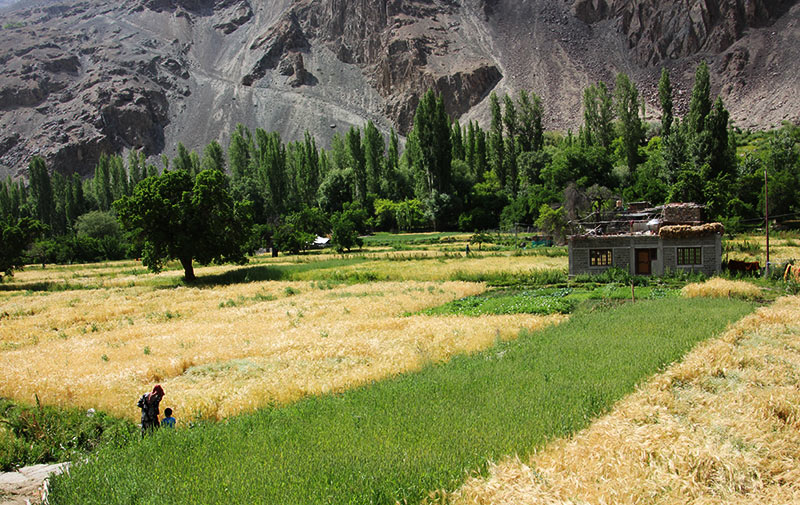 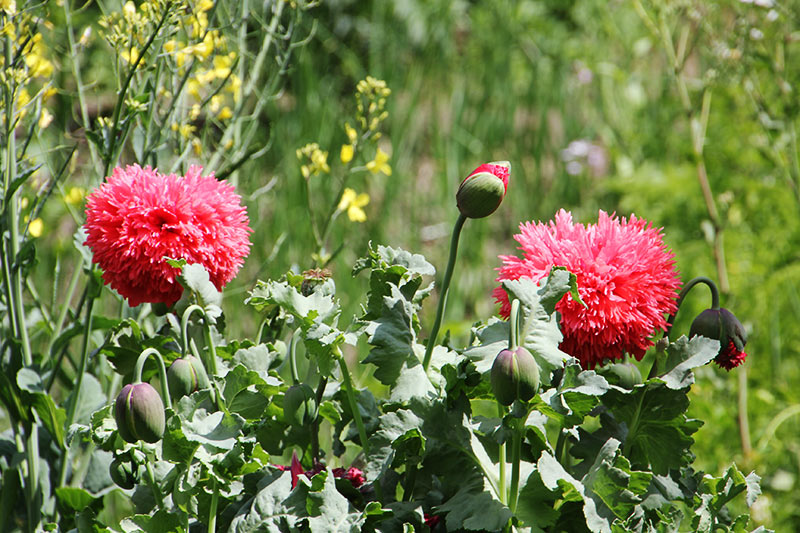 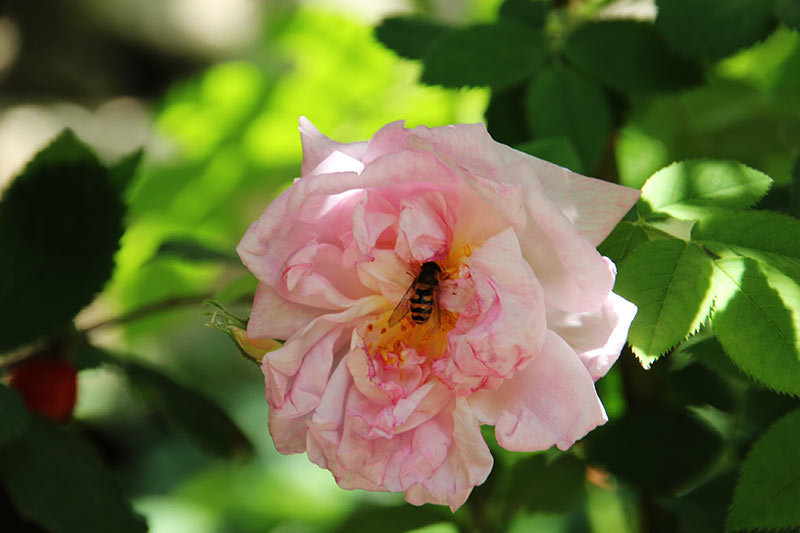 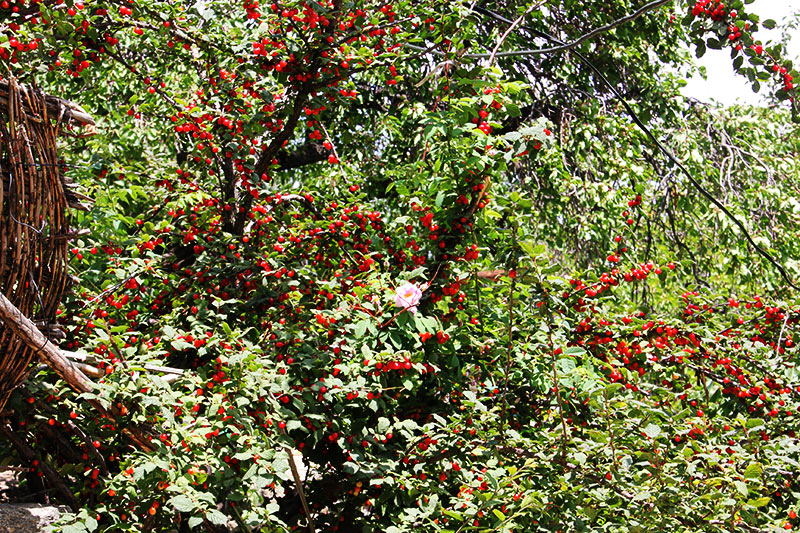 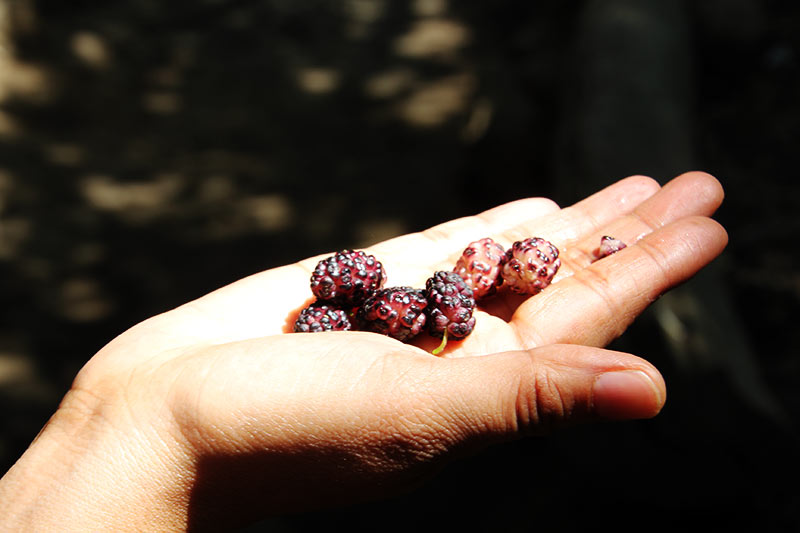 And we were lucky enough to even taste some Blackberries right from the tree. So delicious and sweet...

The cold storage: Then there is this magical cold storage place which locals use to store butter and other food stuff. This place is magical because even when the sun is shining bright and the surrounding place is hot, this particular area continues to be cold and inside, the stuff is always kept frozen. 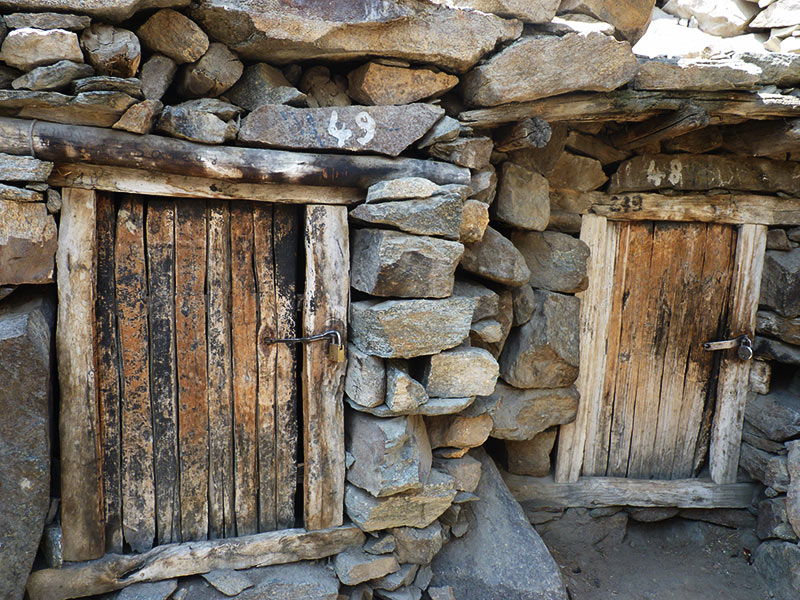 Butter for the people of Turtuk is very important. People use butter for almost all occasions. Butter is used when there is a marriage, when someone is born or when someone dies. So, each villager budgets his/her usage of butter and stores them in boxes. And, those boxes are kept here. Once a box is opened, it needs to be consumed completely and cannot be stored back.

Bunkers: Also, you can find bunkers built using the mortar shells fired during the Kargil war. 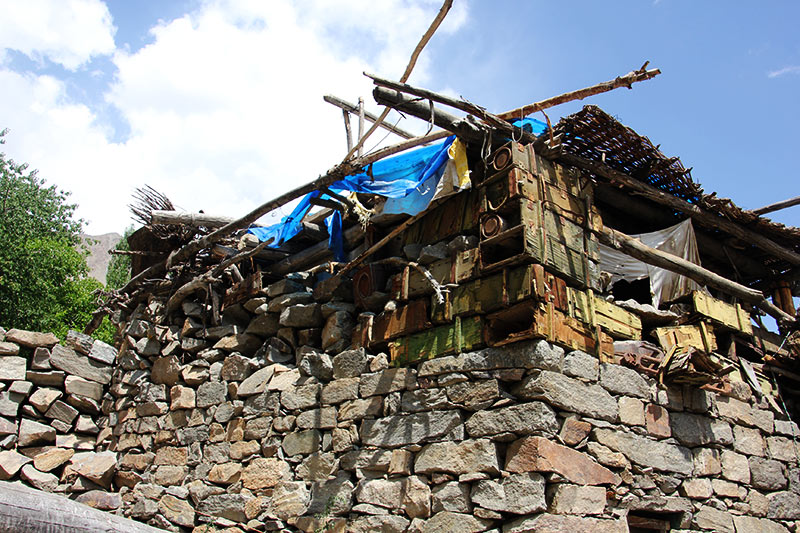 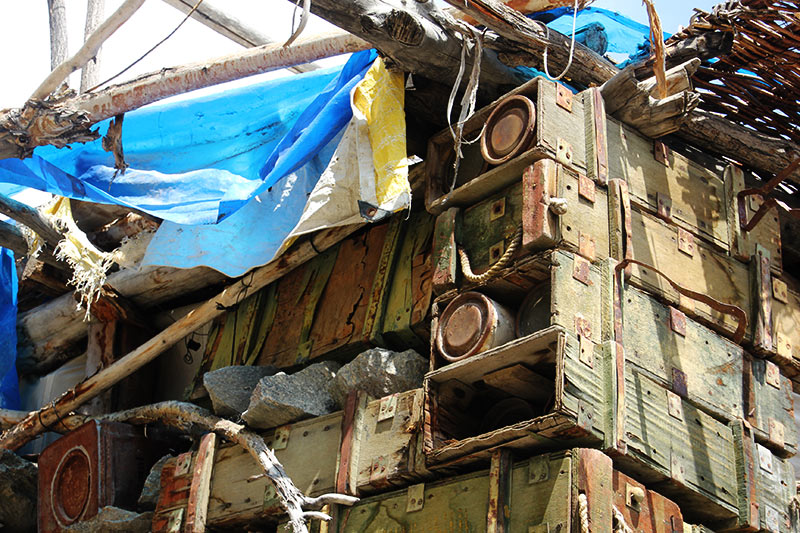 King’s palace and the makeshift museum: You will also find the king’s palace which is now a makeshift museum as well. It is said that the house was built during the 15th century when the village was first established. And, the Yabgo dynasty had ruled this place for a long time. Although, now there is no rule of the King, Kacho Mohammad Khan still lives in the palace and shares his stories and experience with the visitors. 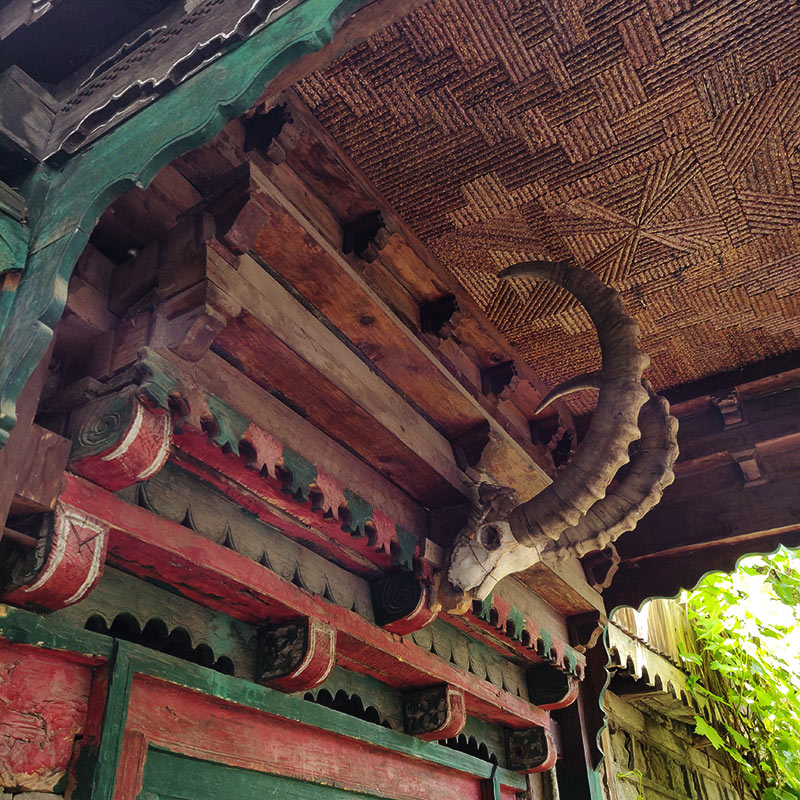 The border: Also, if you go a little more to the north then you can see the last check post from where the village of Thang can be seen. However, tourists are not allowed to go there. But from this place, you can see the LOC along with the Indian and Pakistani bunkers very clearly. At the checkpost, the army will also provide you with binoculars to have a great view and also explain to you all the important spots.

All in all, I can say that Turtuk is a lovely place. Not many people come here to visit and because the main village is still not connected by road, you can enjoy nature in its purest form.

1 - A bike trip to Diveagar - prep for the bigger journey

2 - My trip to Shrivardhan, Harihareshwar

3 - A quick trip to Sinhagad

5 - The trip to Ganpatipule